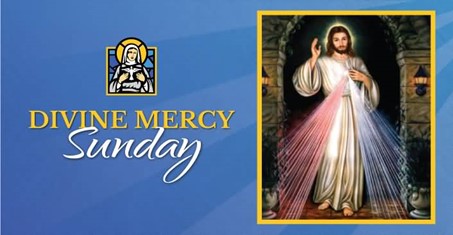 On the Second Sunday of Easter of the Jubilee Year 2000, at the Mass for the Canonization of St. Faustina Kowalska, Pope John Paul II declared the Sunday after Easter be called “Divine Mercy Sunday.”

St. Faustina was a Polish nun who received visions from Jesus, including one of Jesus wearing a white garment with beams of red and white coming from His heart. This vision gave birth to the image of Divine Mercy.

I want the Image to be solemnly blessed on the first Sunday after Easter, and I want it to be venerated publicly so that every soul may know about it… My daughter, tell the whole world about My inconceivable mercy.

I desire that the Feast of Mercy be a refuge and shelter for all souls, and especially for poor sinners. I pour out a whole ocean of graces upon those souls who approach the fount of My mercy.

According to the vision, those who receive communion and attend confession on the Feast of Mercy receive total forgiveness of sins.

Divine Mercy Sunday focuses on the gift of mercy and love given through Christ’s death, burial, and resurrection. As Pope John Paul II stated, “Divine Mercy reaches human beings through the heart of Christ crucified.”